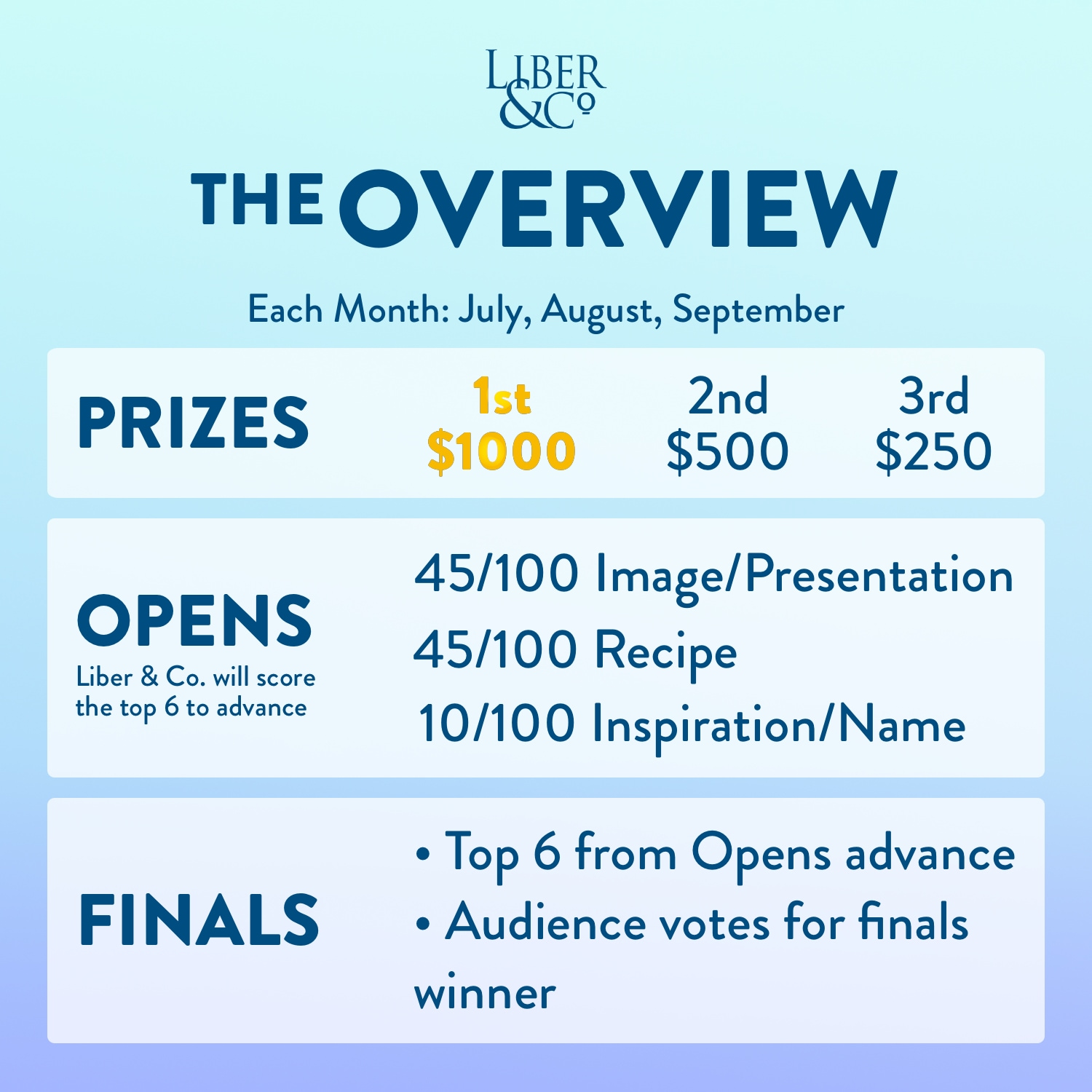 This competition is organized and managed by Liber & Co., Liber Cocktails LLC.

Entries must be posted publicly, use the correct tag, and be messaged to us directly on Instagram @liberandco.

Entry must be submitted by September 15th at 11:59pm EST.

Entries received after the stated closing date will not be accepted.

By submitting an entry, you are agreeing to be bound by these Terms and Conditions.

If you have any questions, please contact info@liberandcompany.com Liber & Co. reserves the right to refuse entry, or refuse to award the prize to anyone in breach of these terms and conditions.

Participants must reside in the United States and have active Instagram accounts.

Entrants must be 21 years of age or older.

Entry must use a Liber & Co. syrup.

Only one entry allowed per person or team.

In entering, you confirm that you are eligible to do so and eligible to claim any prize you may win.

Liber & Co. may require you to provide proof that you are eligible to enter the competition.

Liber & Co. reserves all rights to disqualify you if your conduct is contrary to the spirit or intention of the prize draw or competition.

Liber & Co. is not required to publish or make available the grade for each submission.

The top 6 highest grades will be announced on September 17th.

The final winner will be selected from the top 6 highest grades by audience voting.

Voting will occur on a Google Form that is accessed by a publicly available link that will be shared on Instagram, Liber & Co.'s website, and through the Liber & Co. newsletter. On the form, each of the 6 finalists will have a photo of their cocktail, the cocktail's recipe and a scorecard. The scorecard is from 1-10. Voting will be anonymous.

The highest average score across all votes will determine the winner. Google sign-in will be required to vote. Each person may vote 1 time. Voting will be open to anyone worldwide.

The top 3 from the competition will be announced on September 22nd.

The winners will be mailed a check within 14 days of the announcement. Liber & Co. is not responsible for checks that get lost or are mailed to the wrong address.

Liber & Co. reserves the right to hold void, cancel, suspend, or amend the promotion where it becomes necessary to do so.

Insofar as is permitted by law, Liber & Co., its agents or distributors will not in any circumstances be responsible or liable to compensate the winner or accept any liability for any loss, damage, personal injury or death occurring as a result of taking up the prize.

Liber & Co. is not responsible for entries that are lost, late, misdirected, illegible, incomplete, invalid, unintelligible, damaged, or for entries submitted in a manner that is not expressly allowed under these rules, or for any entry not submitted or received or lost due to any technical error or failure, human or programming error, unauthorized human intervention, inaccurate capture or mis-entry of any required information, or the failure to capture any such information or effects of hackers or failure of any electronic equipment, computer transmissions and/or network connections or for problems of any kind, whether mechanical, human or electronic; all of which will be disqualified.

All Entries (images, text, and so forth) may be used by Liber & Co. for the promotion and marketing of the competition.

Liber & Co. is not responsible for and shall not be liable for late, lost, misdirected, or unsuccessful efforts to notify a potential winner.

Liber & Co. shall have no obligation to make more than one (1) attempt to notify a Participant that he or she has been selected as a potential winner. Winner is responsible for any and all applicable fees, federal, state and local taxes, if any. Winner is advised to seek independent counsel regarding the tax implications of accepting a prize.

By entering the Promotion, you grant the Released Entities permission to use your personal information in accordance with Liber & Co.’s privacy policy located at LiberandCompany.com.  By participating in the Promotion, Entrants hereby acknowledge that they have read and accepted Liber & Co.’s privacy policy. By accepting a prize, Winner grants permission for Liber & Co. to edit and use his/her name and likeness for advertising and publicity purposes worldwide and in all forms of media now known or hereafter devised in perpetuity without further compensation or authorization, unless prohibited by law.

This Promotion is conducted in English (which will be given its everyday ordinary meaning), and Entrant agrees that: (a) any and all disputes, claims and causes of action arising out of or connected with this Promotion or any prizes awarded shall be resolved individually, without resorting to any form of class action, and exclusively by the courts of the State of Texas and in the venue of Travis county; and (b) any and all claims, judgments and awards shall be limited to actual out-of-pocket costs incurred, including costs associated with participating in the Promotion, but in no event attorneys' fees. All issues and questions concerning the construction, validity, interpretation and enforceability of these Official Rules, or the rights and obligations of the participant and Liber & Co. in connection with the Promotion, shall be governed by, and construed in accordance with, the laws of the State of Texas, without giving effect to any choice of law or conflict of law rules which would cause the application of the laws of any jurisdiction other than the State of Texas.

CAUTION:  ANY ATTEMPT BY AN INDIVIDUAL TO DELIBERATELY DAMAGE ANY WEBSITE OR UNDERMINE THE LEGITIMATE OPERATION OF THIS PROMOTION MAY BE A VIOLATION OF CRIMINAL AND CIVIL LAWS.  SHOULD SUCH AN ATTEMPT BE MADE, LIBER & CO. RESERVES THE RIGHT TO DISQUALIFY AND SEEK DAMAGES FROM ANY SUCH INDIVIDUAL TO THE FULLEST EXTENT PERMITTED BY LAW.

Spring into Spring with these Cocktails